Last night around 9:45 p.m., a very long train was stopped dead right in the middle of League City, blocking FM 518 and Walker Street.

When that happens, the only way to get from one side of League City to the other side is to head south to League City Parkway (SH 96), and go over the train bridge, which is what we did.  Upon crossing the bridge, we could see the nose of the train to the south of the bridge, so this darned thing was well over a mile long, stretching all the way back presumably to somewhere in Old Town or perhaps even Clear Creek.

In other words, it wasn't just a couple of intersections affected - the entire city was gridlocked, as motorists and pedestrians alike were denied mobility.  This kind of thing creates unsafe conditions as drivers start making frustrated U-turns en masse along the arterials so that they can escape the jam.  And we had to drive all the way to SH 96 just so that we could double back all the way north to a neighborhood that fronts on Clear Lake.  We don't know how long that train was stopped, but we DO know that, 20 minutes after our first U-turn, Google was still failing to update speed conditions along FM 518 near Highway 3, suggesting that traffic was still not moving normally there.

My first question is this:  What recourse does our local police department have when this kind of thing happens?  I have a friend who is an officer in another city and I recall him stating a few years ago that it was against the law (in his city, at least) for trains to block public rights-of-way via stoppage for longer than 5 minutes.  It was his absolute most-favorite ticket to write (ticketing the train engineer) simply because it's the kind of thing that disrupts and inconveniences thousands of people.  And what happens if an ambulance needs to rush someone to the hospital and the road is blocked?  Train stoppage is a potentially serious thing.  According to my officer friend, much of the time, the trains are not stopped because of a mechanical failure - they stop awaiting orders or because of track traffic or car shuttling or whatever.  So it's something that's avoidable for them.

My second question is this:  When public aggravations like this occur, what's the preferred means of communicating with LCPD?  Obviously this doesn't rise to the level of being an emergency so 911 is not appropriate.  I'm also not sure I want to dial the main number 281-332-2566 and bother the dispatcher with something like this, and so I went searching on the internet to see if there are other informational ticker-like options out there.  Something like a text or email message that the dispatcher could read when not responding to more urgent calls.  I did find that the department has a button called "Online Reports & Incidents", but when clicked, it goes through to a consortium webpage of local police departments.  But when I clicked the "Contact Us" field for options, this is what I got: 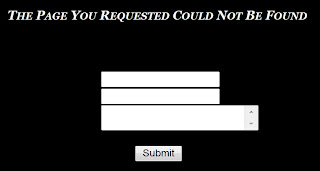 So anyway, I'm not really sure what the answers are to those two questions, but I'll forward this blog link to the LCPD area commander for the region affected by last night's train, and we'll see what info is forthcoming.
Posted by Centerpointe Moderator at 8:07 AM

I'm forced to moderate comments because the spammers have become too much for me to keep up with. If you have a legitimate comment, I will post it promptly. Sorry for the inconvenience.