This is the ninth entry in my "dash cam" blog series, in which I'm using a continuous-loop digital video recorder (DVR) mounted inside my car to capture the dangerous situations that put the citizens of greater Houston at unnecessary risk.  Today's entry focuses on pedestrian perils, but this time the risk derives not from dangerous drivers, but from municipal shortsightedness.

Here in the tony NASA community of Clear Lake, we've managed to put men on the moon and space shuttles in orbit, but we can't seem to put sidewalks beneath kids.  This dash cam screengrab tells that sorry tale:
Here you see a boy who appeared to be 10 to 12 years of age, walking at the edge of a road that doesn't have a sidewalk, or even a shoulder.  I inserted a red arrow to draw attention to the boy's right foot, which slipped off the curb just before I was about to pass him.  His body teetered toward the roadway as he threw his arms into the air to regain balance.  For one heart-stopping moment, I thought he would tumble beneath my wheels, but thankfully he managed to recover himself.

This right here is why people don't walk in our communities.  This is a big reason why parents don't let their children play outside, the children who grow increasingly fat as they sit for hours each day in front of video games instead.  This is no joke - it's dangerous for kids to venture outside in areas where appropriate infrastructure does not exist.  If this stumbling boy had fallen into the traffic lane, he would have been killed instantly - and by me, a driver who tries harder than almost everyone else to protect cyclists and pedestrians.

Twenty-five years ago when I first set foot in America as a young university student, I was awed by the great displays of wealth that are everywhere, but horrified by the absence of municipal planning.  I was dumbfounded to see a lack of pedestrian access in so many areas. Like many bootstrapping immigrants, I'm a staunch conservative, bordering on libertarian. I'm a minimalist on issues of public spending, but there are basic necessities that governments must provide (or require developers to provide) if societies are to prosper, and diversified transportation systems are solidly on that very short list. When I first saw residential areas like this one above constructed without sidewalks, I had a "red alert" reaction. I knew instantly that this shortsightedness would come back to haunt America in ways that nobody was imagining in those years.

And today America struggles with epidemic levels of obesity, its comorbid diseases, and associated insupportable health care costs. We failed to sow sidewalks and other infrastructure and lifestyle precedents that accommodate normal outdoor physical activity, and now we are reaping the natural results of those policies.

A quarter century after I first witnessed scenes like that dash cam screengrab above, my "red alert" is stronger than ever, because we have not reached a tipping point of improvement.  In many new and redeveloping neighborhoods, developers are now compelled by law to include sidewalks, but not in others, and municipalities themselves are still coming up shockingly short where infrastructure is concerned. 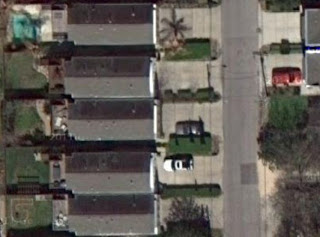 Today as I watch local quality-of-life advocacy groups fight to achieve even modest gains in bicycle and pedestrian access, I still wonder:  How will history view these priorities, this abject transportation poverty in the midst of all this wealth?  It's great that our communities were so instrumental in America's launch into outer space, but can we please not forget our many citizens who still do not have access to the safe pedestrian and bicycle infrastructure that should be non-negotiable here in our community space?

Posted by Centerpointe Moderator at 8:46 AM 0 comments

Email ThisBlogThis!Share to TwitterShare to FacebookShare to Pinterest
Labels: Traffic

No trains in vain

Driving down El Dorado Boulevard toward Highway 3 a few days ago, I could not help but notice this auspicious sight:
"NO TRAIN HORN"?!  Did the good people of north Clear Lake finally manage to establish a quiet zone for themselves??  I lived about three miles north of this intersection for seven years, and I don't recall any quiet zones.

A quick Google revealed absolutely no useful information regarding anything other than Houston's Washington Avenue Quiet Zone, so this will remain a mystery for now.  It's a mystery that I will contemplate the next time there's a rogue east wind and that 3:30 a.m. train wakes me up as it blares its way across East Walker Street in League City (if you're new to Centerpointe, that's the same rail line as the one depicted above, just farther south).

Fortunately those east winds are fairly rare, because we don't want to listen to trains.   Stuff like this is far easier on the ears:

Posted by Centerpointe Moderator at 7:37 AM 0 comments

Email ThisBlogThis!Share to TwitterShare to FacebookShare to Pinterest
Labels: Environment

The cold light of day

This post is dedicated to all the folks who live toward the northeast side of Centerpointe Section 9, none of whom could possibly be sleeping right now.  Promptly at 6:37 a.m., the first six ready-mix trucks arrived......and the slab pouring began.
People ask me frequently if I mind living in a perpetual construction zone.  With about 14 houses under simultaneous construction, Section 9 often feels a bit like Beirut on a bad day.
About 95% of the time, my answer to that question (do I mind living in the middle of this) is "no".  This is the deal we all signed up for when we decided to commission our own houses to be built.  The months (over a year, in our case, as we were in this section first) of the thunderous racket and the blowing dust and the strewn trash and congestion and the running of the right-of-way gauntlet in and out of the neighborhood are all part of it.

But every once in a while, when there is an unearthly shattering of the dawn, we all look forward to the day when Section 9 is finally completed, and the world will once again be relatively still.
Posted by Centerpointe Moderator at 5:14 AM 0 comments

Dash cam, Part 8: Unsafe at any speed around our schools

All those dangerous drivers you see on our freeways and local public streets - do you suppose for one minute that they magically transform into safe drivers once they get anywhere near a public school campus?

Ri-ight.  I mentioned in Dash cam Part 1 that most of my motivation for buying a car DVR in the first place was to raise awareness about child-endangering traffic violations that I witness around our schools.  And as predictably as the sun rising in the east (with or without sundogs), so it was that a near-miss was recently caught on video:
Suffice it to say that a student was walking near the front of a bus when a driver veered sharply around the left side of the bus, almost striking the student.

I released the full video to the ISD in question, and the response was immediate and comprehensive.  Procedural controls are being developed to minimize the conspiracy of circumstances that led to the situation represented in the redacted screengrab above.  They're doing a wonderful job of responding to this with a rigor analogous to what would be applied if this had been a near-miss that occurred in an industrial setting.

I don't envy ISDs in dealing with things like this.  Nobody will ever convince me that any of our local ISDs employ a single person who isn't absolutely passionate about protecting children from dangerous drivers.  But they are in the business of education, not traffic enforcement, and their personnel can't be everywhere at once.  There's only so much any of us can achieve when it comes to minimizing the impacts of unsafe driving, but if each of us does what we can do, there will be a cumulative positive effect, and progress will occur.

The particular scenario represented in the example above is of personal significance to my family.  Many years ago, one of my relatives was killed in precisely this manner.  An aggressive motorist peeled out from behind a school bus, striking her directly in front of her devastated brother and all the other schoolchildren who were heading to class on that fateful morning.  She died of internal injuries from the blunt-force trauma.  This one is for you, Barbara.


"Be the change you wish to see in the world."
- Mahatma Gandhi
Posted by Centerpointe Moderator at 10:01 AM 0 comments

Email ThisBlogThis!Share to TwitterShare to FacebookShare to Pinterest
Labels: Traffic

It may have taken the United States ten years and over a trillion of our mostly-nonexistent (i.e., debt-effective) taxpayer dollars to get their man, but fortunately, Mayor Randall has been considerably more efficient: Galveston County Daily News reported yesterday that her private investigator traced the controversial League City Votes website to one particular candidate.

I mentioned in a previous rant that Centerpointe Communicator is primarily a lifestyle blog, but that it's worth taking a look at what's happening politically when the situation calls for it, because our lifestyles are formidably impacted by the financial decisions that our elected representatives make.   And when I see the type of smear campaign represented by that website, it makes my blood boil.  Nobody said politics was anything less than a blood sport, but that stuff is the equivalent of pre-emptively salting the suburban fields.  It's hard enough for conscientious citizens to sort through the real issues and the fiscal choices we face without having dirt thrown in our faces in a sight-blinding effort.  Fight fair, you flaming idiots!!!  You owe us that much, and if you had any respect for the electorate, you wouldn't need to be reminded of it!

Interestingly, we may not have heard the last of this issue yet, as there are suggestions that the lack-of-disclosure extends more deeply than the fingered fall guy.   But for that, I refer you to The League City Blog, where the debate is already in progress.
Posted by Centerpointe Moderator at 6:43 AM 0 comments

If you happened to be gazing up at the heavens at about a quarter past two this afternoon, this is the remarkable sight that would have greeted you:

It's called a sundog, a halo around the sun created by light refracting through ice crystals in the atmosphere.  I don't know much about these things, but I cannot recall another occasion where I saw one this vivid in greater Houston, especially with the characteristic rainbow colors as opposed to a plain white ring.  This is a natural phenomenon more typically associated with northern latitudes, at least in my limited experience.   But with all the unprecedented weather we've been having lately, nothing surprises me any more.

And this sighting is yet another example of what Ferris Bueller said: