Send in the Sandhills

I haven't lived in Centerpointe long enough to know whether the unusual concentration of large birds in this area is "normal", or is partially a result of the drought forcing many species including avian predators into suburban areas to search for food, as some recent news articles have suggested.

What I DO know is that the number and diversity of birds is remarkable.  Part of this is certainly due to the relatively large amount of undeveloped green space in our area:
Drive south on West Walker on any morning and you are absolutely guaranteed to see at least two towering raptors (birds of prey) perched on light posts between here and Victory Lakes.  This morning, there were three.

About two days ago, I saw something I've never seen before: I'm about 75% sure I saw a bald eagle flying over Clear Creek at IH-45.  It was simply too large to be any other bird of prey.

And this morning again, another new sighting: a Sandhill Crane in one of the fields on the east side of West Walker just north of Victory Lakes Intermediate School.  Sandhills winter in Texas and are not uncommon, but this is the first time I've ever seen one in a suburban neighborhood.
Anyway, the moral of this short story is that the Cooper's Hawk I recently spotted on my own backyard fence was no fluke.  Look around as you're driving the area, and you might be amazed at what you see in the way of wildlife.
Posted by Centerpointe Moderator at 6:08 AM 1 comments

Email ThisBlogThis!Share to TwitterShare to FacebookShare to Pinterest
Labels: Environment, For Kids, Wildlife

It's hard to miss all the dirt hitting the fan at the corner of West Walker Street and State Highway 96 (League City Parkway).
As soon as I saw those dirt piles grow (and they got even bigger than what's shown in this pic), I knew it was likely to be a gasoline retail station: all that earthmoving is so that they can bury multiple storage tanks which are usually at least 10,000 gallons apiece.  For a short time, I held out a faint hope that it was yet another of my beloved Buc-ees stores, perhaps a twin to the one we are ever-so-fortunate to have at SH96 and Louisiana (when I moved to Galveston County to be with my husband, he consoled me for my Harris County losses by reminding me, "At least you'll be living closer to a Buc-ees now...").

How the heck did I track that down??  Well, if you look at the dirt piles carefully, you can see planted beside them some crude spray-painted signs with the number "1114" facing both West Walker and SH 96.  Tradesmen erect those things so that all the subcontractors can efficiently route supplies to the correct construction sites.  Words are not expedient; all they typically use is numbers.  And there is no "1114 West Walker" so therefore the handpainted signs had to refer to a League City Parkway address.

It amazes me the sheer volume of STUFF that gets posted to, and then left on, the internet for no obvious reason.  If you'd like to know more about the technical aspects of this patch of real estate, you can peruse this document, for instance:
This is the reported general configuration of what the station will look like when built, according to that report:
As platted above, the station doesn't appear to consume the entire tract of land that borders Harvard Pointe to the south.  The CAD map currently shows that tract as undivided:

So with the publicly-available information I can find as of today, it's not clear what else will be built on that tract of land along with the gas station, or even if the development of the northern portion is planned yet.  That's an important question for at least six or eight Harvard Pointe families, who I'm sure will want their quality of life maintained (e.g., no bright lights over their fences, that sort of thing).

If any of you, especially you potentially affected homeowners on Harvard Pointe, have received public relations overtures from the developers of this tract, please drop me a line - I'm just curious as to whether any more details are available.   Thanks.

And oh - if anyone would like more information about The Little Lake Jackson Corporation That Could, Did, and Will Continue To Do So, it's best to start at the top, so I recommend Houston Chronicle's road trip article about the Luling store (and you haven't lived until you've stopped at that place).  There's also "I Was a Buc-ees Virgin" by well-known Houston food critic Alison Cook, but at least as of that article, she had failed to succumb to the spell.  And oh,  - the Buc-ees in Pearland has its own Facebook page.  I guess we'll have to wait a bit longer for the League City Parkway store to attain a similar level of public endearment.  Meanwhile, we'll keep buying those breakfast tacos.
;-)
Posted by Centerpointe Moderator at 8:26 PM 0 comments

Email ThisBlogThis!Share to TwitterShare to FacebookShare to Pinterest
Labels: Development

Back in November, I published a blog post imploring people not to leave dog food outdoors because it attracts coyotes and other pests.  This admonition was prompted in part by a newspaper story of a coyote having to be shot inside a fenced League City back yard.

In that November post, I also mentioned seeing coyote tracks in Section 9 before it was substantially completed.  My overwhelming suspicion was that they were feeding on the abundant food scraps left by tradesmen building our 75 new houses.  At the time, I even sent pics to Meritage and Brighton in an attempt to get them to encourage their trades to observe better food hygiene and prevent a scenario in which they were inadvertently sustaining the local scavenger population. 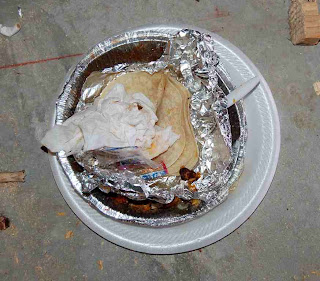 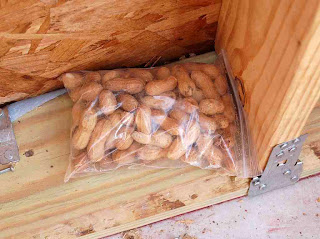 Well, I didn't see any evidence that my public education effort was highly successful, and last night my husband and I saw what we believe was a coyote making its way into Section 9 via the eastern Arlington Pointe cul-de-sac (it could also have been a large fox, but fox are generally too smart to be seen by humans).

Coyotes generally don't present much of a risk to humans, but they have been known to dine on small pets as well as dog food and greasy tortillas.  Miniature dog breeds, cats, and the like.  We suspect strongly that we lost our previous cat to a coyote while living on the north side of Clear Lake a few years ago.

So mind your pets and it's probably not a good idea to leave the smaller ones in your backyard for extended periods after dark.  You might also think about ensuring that some kind of shelter is available for them (small dog house or whatever), a place where they could take refuge and into which a coyote hopefully could not fit.
Posted by Centerpointe Moderator at 11:02 AM 0 comments

A public meeting will be held tomorrow (Wednesday) night at 6:00 p.m. at the Johnnie Arolfo Civic Center, 400 West Walker, to discuss League City's Main Street Implementation Plan.  For those of you not familiar with the venue, it's right up the street from Centerpointe, in the same "municipal row" that is bracketed by the police station on its west end and library to the east.

The purpose of the Implementation Plan is discussed in this morning's offering by Galveston County Daily News.  Basically, it's a plan intended to help transform League City from a place name on a map that folks drive through as they're on their way to somewhere else, and into a "destination" that offers a greater concentration of recreational and retail options.

We'd all like to see improvements along those lines, but the instigators of this effort have quite a challenge on their hands.  It is precisely because League City is a municipal poster child for unplanned development that it is not a "destination", and it will be very hard to crack that socioeconomic development nut in any meaningful way.  The encumberances upon the city are severe and include but are not limited to the following: it is sliced in half east-west by one of the worst arterials in greater Houston (FM 518), sliced north to south by a rail line that allows crossings only at certain arterials, and many of its residents would rather stay at home than face the perils of Five Corners.  The city lacks cohesion even on the localized scale of its original core neighborhoods.

Having been out of the country for a spell, I have not had a chance to review the Implementation Plan, but upon scanning it briefly this evening, one thing jumped out at me: strengths and weaknesses appear to have been enumerated but have not yet been assigned any kind of relative weighting.

For instance, with respect to the "Creekside" area, which is where we lived prior to moving to Centerpointe, the Dallas Salmon Wastewater Treatment Plant is listed as a weakness, and the presence of Clear Creek is listed as a strength with development potential.  Paddle boating and other water recreational activities are listed as development possibilities.

When I read that, my first reaction was, "Holy wow, Batman!"  Did the writers of this Implementation Plan actually try to launch any watercraft of their own before presenting that idea?  I doubt it.  As a sometimes-kayaker I have, in fact, put in at the small Heritage Park boat ramp.  It is not for the faint of heart!!  The first thing a paddler has to do is run a major gauntlet of treated sewage which is literally blasting out of the adjacent Dallas Salmon Wastewater Treatment Plant at a rate of several hundred thousand gallons per hour.  Assuming you can keep your bonny craft upright through that turbulent mess long enough to make it northward toward Clear Creek proper, you run a very real risk of being mowed down by the power boaters who fly up the channel at about 40 miles per hour.  Even if they don't actually hit you, their wake vortices will easily swamp a non-motorized kayak or paddle boat.  And that water they spray up into your face in the process is, of course, largely treated sewage.

Even if you manage to strike a calm morning with no power boats and a lower rate of effluent discharge, you still might be faced with noxious odors emanating from the plant.  According to Texas Commission on Environmental Quality (TCEQ) records, there were twenty-four public complaints against the plant in the period 2006 - 2009.  All but one of them pertained to foul odors.

﻿The chronic odor issues with that plant were one of the reasons we moved from "old town" to Centerpointe in 2010.  An installation like that just doesn't make for optimal quality of life, whether you're trying to live in that area or simply engage in recreation there.

Seriously, in sum, the whole boating / floating / water recreation thing is a nice idea, but substantial infrastructure and procedural changes would be needed before I could see it being attractive to the general public, or even do-able in a halfways safe manner.

It's not my goal to be a naysayer, however, and hopefully some good ideas for further development will emerge from this planning and public meeting process.  If there's one thing that League City needs right about now, it's good development ideas.
Posted by Centerpointe Moderator at 8:19 PM 0 comments